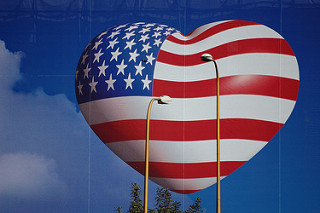 As we are rounding toward the final weeks before the US election, I believe it is a time to press pause and review the last year and a half of this campaign. I think we can all agree that this campaign has been quite a bumpy road full of twists, turns, and unexpected outcomes. There have been a lot of noteworthy moments along the way, but for me, the slogan “Make America Great Again,” has been the most troubling.

I have traveled the world, lived in many countries, and had lots of international experiences. What I have come to find is that the things that Americans hold near and dear to their hearts are available in a lot countries around the world. They are not just exclusive to the USA. But to make the United States “great again,” we must start by looking at some systemic issues that are causing our demise.

In my opinion, the mark of a great nation is their basic moral compass. How a country defines its morality is critical to their success, but also to world peace and prosperity. However, as I see it, there has been significant moral decline and this election has highlighted that issue time and time again with both candidates. To change this, we MUST bring values to the forefront of societal development in the US and throughout the world. We have sufficient documentation of ancient civilizations that failed and only further demonstrate that moral values ARE a requirement not only for the success of a civilization, but for its VERY survival. In his study, When Nations Die, Jim Nelson Black identifies ten factors that have appeared in great civilizations of the past and led to their decline and fall. In some cultures, Black observes, as few as three or four of these symptoms of social, cultural, and moral decline would be enough to bring a society to the point of imminent collapse. The list includes:

Aiding the breakdown of decadent cultures was a philosophy of “change for the sake of change.” Dissatisfied with traditional authority, the cultural elites turned their backs on values and traditions as old as the nation itself. Tragically, according to Dr. Black, the United States is the FIRST nation in history where ALL ten symptoms are present in one society at one time.

In order to make America great again, we MUST go back to some basic fundamental concepts that are rooted in love, truth, peace, right conduct, and nonviolence. This is how we change the direction of a nation and positively impact our global community. However, with the continued absence of these values, America won’t be great. We will continue down a hole that perpetuates materialism, greed, and all the things that take down civilizations. We must infuse love, tolerance, and understanding back into our society because without basic human values guiding us, we become morally bankrupt. Without love as our purpose, we become empty. Without understanding of both, we become lost. If we want change, we must elect and follow people who have a unwavering moral compass that can guide our nation and impart global transformation.